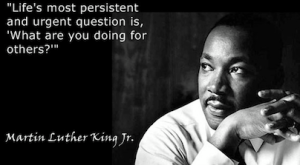 “Loving Your Enemies.” It’s so basic to me because it is a part of my basic philosophical and theological orientation: the whole idea of love, the whole philosophy of love. In the fifth chapter of the gospel as recorded by Saint Matthew, we read these very arresting words, flowing from the lips of our Lord and Master: ‘Ye have heard that it has been said, ‘Thou shall love thy neighbor, and hate thine enemy.’ But I say unto you, love your enemies, bless them that curse you, do good to them that hate you, and pray for them that despitefully use you, that ye may be the children of your Father which is in heaven.”

It seems to me that this is the only way. As our eyes look to the future, as we look out across the years and across the generations, let us develop and move right here. We must discover the power of love, the power, the redemptive power of love. And when we discover that, we will be able to make of this old world a new world. We will be able to make men better. Love is the only way. Jesus discovered that.

Not only did Jesus discover it, even great military leaders discover that. One day as Napoleon came toward the end of his career and looked back across the years, the great Napoleon that at a very early age had all but conquered the world. He was not stopped until he became, till he moved out to the battle of Leipzig and then to Waterloo. But that same Napoleon one day stood back and looked across the years, and said: “Alexander, Caesar, Charlemagne, and I have built great empires, but upon what did they depend? They depended upon force. But long ago, Jesus started an empire that depended on love, and even to this day millions will die for him.”

Yes, I can see Jesus walking around the hills and the valleys of Palestine.  And I can see him looking out at the Roman Empire with all of her fascinating and intricate military machinery. But in the midst of that, I can hear him saying: “I will not use this method. Neither will I hate the Roman Empire.”

So this morning, as I look into your eyes, and into the eyes of all of my brothers in Alabama and all over America and over the world, I say to you, “I love you. I would rather die than hate you.”  And I am foolish enough to believe that through the power of this love somewhere men of the most recalcitrant bent will be transformed. And then we will be in God’s kingdom. We will be able to matriculate into the university of eternal life because we had the power to love our enemies, to bless those persons that cursed us, to even decide to be good to those persons who hated us, and we even prayed for those persons who despitefully used us.

One thought on ““Loving Your Enemies” – Dr. Martin Luther King”

He has told you, O mortal, what is good;
and what does the Lord require of you
but to do justice, and to love kindness,
and to walk humbly with your God?